Your cart is currently empty.

You will receive a 10% coupon code via email, and be the first to know about new products, updates & sales.

Offering Gifts For Every Occasion

Handcrafted From Start To Finish

With our in-house clay & glazes

Take a Look At How It's Made

Take a glimpse into what it takes to make our pottery Blanket Creek Pottery is run by Paul Borian and Yael Neeman-Borian, a married couple who work together from their pottery studio in the countryside of Kentucky.

Paul learned the craft during a two-year apprenticeship, and in 2001 established his own business from the ground up, one wheel-thrown pot at a time.

It remained a one-person studio until he met his wife, Yael, in 2014.

Wow these mugs were everything I anticipated they would be! The colors are gorgeous and the mugs are elegant yet sturdy. I could see that these items were made with care and love ❤️ These mugs will be my go-to drinking vessels for EVERYTHING! Tea 1st thing tomorrow morning. 😉 Paul & Yael also wrote a thank you note on the receipt, but I say no, thank YOU BOTH! I'll be sending the mugs, bowls, and plates as gifts for the rest of the year. 🙌🏼 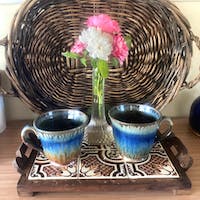 I'm in love with my new mug! The colors and technique are so stunning. The mug is the perfect size for my hands! This is my favorite mug shape, which is a difficult shape to find normally. The quality is amazing and shipping is super fast! Paul and Yael are very accommodating, friendly, and kind. Since buying this mug - I've purchased so much more from this shop! 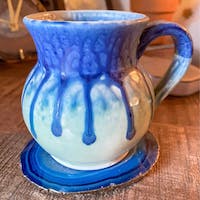 I love this vase! I can't wait to put summer flowers in it, but bok choy blooms will have to do for now. The vase arrived fast and we'll packaged. 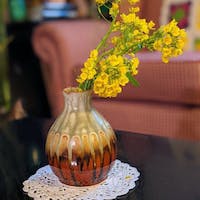 Let's just say, I will 10000000% order from this store again. The pottery is phenomenal, perfectly proportional and the color is vibrant but matted to keep a natural feel to the item. 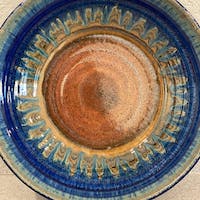 Beautiful! This piece is exactly as I imagined it and as pictured. The detailed description of the vase was spot on and I do appreciate that as ordering something with colors to go in a specific room in a specific location from on line isn't always successful. In this case, it was exactly the way to go because the images depicted on line we what the actual colors turned out to be. In addition, the glazes look fantastic! This piece of pottery is truly a work of art. Thank you so very much! 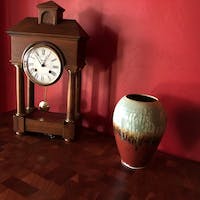 Oh my goodness! This mug is absolutely gorgeous! I wanted a mug with a small-mouth opening so my coffee wouldn't get cold as quick as it does with regular mugs, and this mug keeps my coffee hotter way longer! I'm more than pleased! It's so beautiful that I refuse to put it in the cabinet, but instead made a spot for it directly beside my Keurig so I can see it any time I'm in the kitchen. Also, I love the size! I use the highest setting on my Keurig and it still has more than enough capacity to hold creamer.

I enjoy drinking a cup of coffee in the morning when I'm walking my sweet Maggie outside on our property, and it's so nice that I don't have to worry about any coffee sloshing out as I walk with a full mug. I'm so glad that I treated myself with this beautiful piece of art to enjoy my coffee! 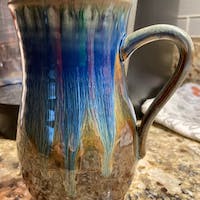 I love all the dishes that I bought from this shop, but I think these are my very favorite. The size is perfect for a snack, side, or perfectly portioned dessert! I'm considering buying more already just because I can see these getting a ton of use. I also love the shape, and the rim to keep the food contained! 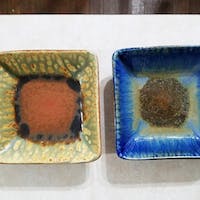 This is a beautiful bowl, I love the colors! I plan to use it for pasta, stews, stir fry, salad, etc. It is very high quality. 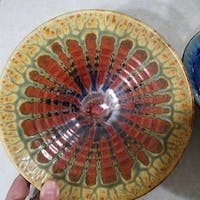 I love these mugs! I constantly have a mug in my hand since I drink hot beverages all year round. Coffee, tea, hot cocoa ... I like a big mug and these are big and I like shape because the rounded base means the drinks stay hot for longer. I picked the mugs from BlanketCreekStudio because their glazes are really beautiful. 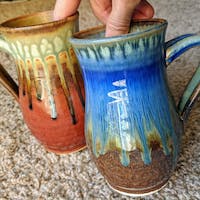 Beautiful handmade bowl. I made a tiny fountain with this, and it is perfect! 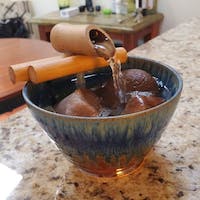 Treated myself to this wonderful mug! Shipped super fast and well packed. Glazing is beautiful and unique. Will definitely be purchasing gifts for family. 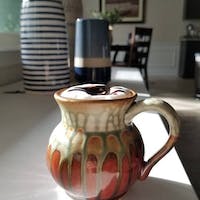 Extremely beautiful pottery. Shows great color vibrancy under sunlights. Made sturdy and delicate. I love it sooooo much. Btw it's perfectly packed with bubble sheets wrapped and it arrived in whole. 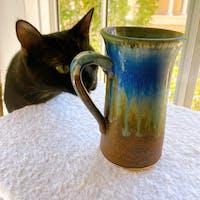 Fabulous piece of pottery! I gave this as a gift & they loved it! 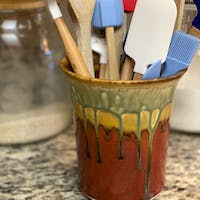 It's a lovely mug! It arrived so quickly - within days - well packaged. I bought this as a gift for my housemate who's been on a years-long search to replace a favorite mug of hers that broke, and I have a feeling she'll really love this one. :) Great experience purchasing from Paul and Yael! 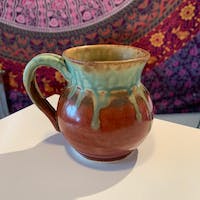 Such an incredibly beautiful mug! The combination of the glaze colors is like nothing I've ever seen! I actually bought a second mug and had it sent as a gift to a friend. I was surprised with how quickly they shipped. Paul and Yael are incredibly talented artisans and yes, I will be purchasing more from them. 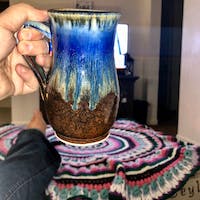 Get a coupon code for your next order, and be the first to know about sales, new products & updates.